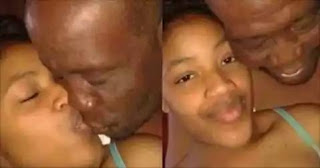 This is totally evil. Father and daughter? Just when you think you have seen it all, this happens. Oh my God. According to the Emmanuel Udoh who was arrested after defiling his daughter in their residence, at 2 Ajasa Command Road, Meiran, Lagos state:

“I have had s.exual intercourse with her severally. It is a normal thing and I don’t see anything bad in sleeping with my daughter because I know she will not get pregnant.

Vanguard reports that Udoh’s ex-wife took custody of their two children after they separated seven years ago when the victim was ten years old. The victim who lived with her mother reunited with her father when her mother brought her back after she completed her secondary education in the month of September to enable her further her education.

Trouble, however, started, in the evening, on September 13, when Udoh asked his daughter to go and have her bath. The victim who initially refused went to take her bath after her father insisted.