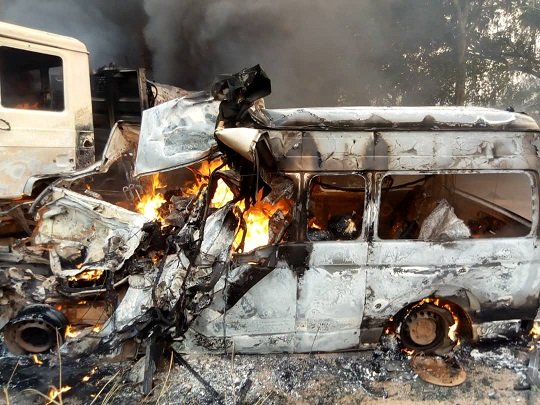 According to The Nation, five staff of Okomu Oil plc in Edo State have been burnt to death in a road accident that occured along Iguobazuwa road in Ovia South West local government area.
Two others were critically injured and currently receiving treatment.
The bus conveying the Okomu Oil staff were said to be going to the head office at Okomu from Extension 2 of the firm when it rammed into a lorry on Friday evening.
Several motorists and passengers were stranded as the burning vehicles blocked the highway.
An eyewitness said help could not reached the Okomu Oil staff as the bus burst into flames.
An official statement has not been issued by the firm but a top official confirmed the death of their staff.
The official described it as sad day for workers in the firm.
According to the official, “We are yet to confirmed the number of our personnel involved but we have confirmed five. Two are in the hospital.
“They were coming to the head office from Extension 2. It is a sad day for us.”