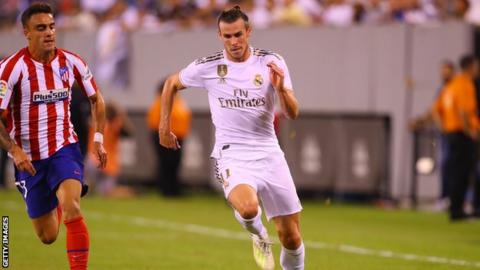 Gareth Bale has pulled out of Real Madrid’s trip to Munich for a pre-season tournament, following the collapseof his proposed move to china
It is understood Bale is not in the right mental state to play after Real president Florentino Perez prevented him from joining Jiangsu Suning.
Last week, Real boss Zinedine Zidane said the 30-year-old was “very close to leaving” having fallen out of favour.
Zidane added his exit would be “best for everyone”.
The 33-time Spanish champions will play Bale’s former club Tottenham on Tuesday in the opening game of the tournament that also includes Bayern Munich and Fenerbahce.
Left-back Danny Rose is included in Spurs’ squad, despite being left out of the pre-season tour party of Asia in order to seek a new club.
Bale joined the Spanish club for £85m from Tottenham in 2013 in a world record deal at the time.
He has three years left on his contract with the Bernabeu club where he has won four Champions Leagues, one La Liga title, a Copa del Rey, three Uefa Super Cups and three Club World Cups.
The Welshman scored three goals, plus a penalty in a shootout, in four Champions League finals for Real as they won the competition in 2014, 2016, 2017 and 2018.
However, injury problems have limited him to 79 La Liga starts in the past four seasons.
He played 42 matches for Real Madrid last season but was booed by the home supporters at times during the campaign.
It has been reported Real blocked Bale’s move as they are demanding a transfer fee for the player.

Former Real Madrid and Wales manager John Toshack has told BBC Radio 5 Live that criticism of Bale is justified and he should have “engaged himself” with Spain and the Real supporters during his six years at the club.
“Come out Gareth, do an interview, speak yourself,” said the 70-year-old. “You’ve been here six or seven years now. You don’t speak the language. That’s an insult to the people that you’re working for.
“It’s not gone down well at all here in Spain, and it saddens me.
“He’s been important in Real Madrid. It’s just a great pity that he hasn’t engaged himself a little bit more with the country that he’s living in, with the supporters that are there every week.
“Gareth, come on. Take a little bit of time out and learn the language.”