Herdsmen Attacks: Why We Want To Set Up Vigilantes Across Nigeria – Miyetti Allah 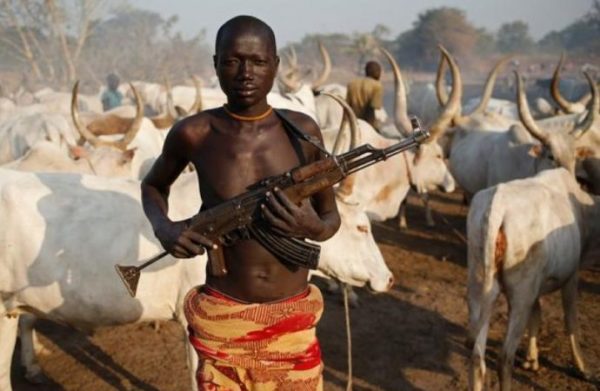 The Fulani socio-cultural organization, Miyetti Allah Cattle Breeders Association of Nigeria, MACBAN, has provided reasons for its plan to establish vigilance groups in the Southeast and other regions of the country.
National Secretary of MACBAN, Baba Othman Ngelzarma, told The Sun that the move was a sure way of bringing to an end the present spate of killings, kidnappings, banditry and other forms of insecurity across the country.
He also said MACBAN’s proposition was misinterpreted in Enugu last week because of lack of proper understanding of it.
Ngelzarma added that the organisation’s desire was not only to deploy vigilantes to the Southeast but to all states of the federation.
According to him:-

“The whole thing was misunderstood or some people deliberately failed to make people to understand us.
“What we meant is that Miyetti Allah will establish a vigilante group, and it was a mere suggestion to the governors of the zone because we feel that security should be everybody’s concern, and we have our members across each and every forest in the southern part of the country.
“So, in order to also help the government and the security agencies to do their work that is why we want to assist in anywhere we can to bring about peace in the Southeast, Southwest and South-South.
“We just proffered that one as a solution because it is only a Fulani man that can identify a Fulani criminal. When a Fulani man commits a crime, it is always easier for a fellow Fulani to go and fish him out and bring him to justice.
“Where there is farm destruction, in order to avoid a confrontation, which leads to loss of lives on either side, it is the Fulani that will help the security to go and bring the culprit to face justice.
“That was what we meant, when we said let some of our members work with either the security, neighbourhood watch or vigilante group as the case may be, so that they will be working together if there is any problem or any sort of crime, farm destruction as the case may be, then our members within the group of vigilantes will go and apprehend the culprit so that he faces justice and pay for the farm he has destroyed.
“It was a mere suggestion to the state governors. MACBAN is not going to appoint a vigilante. Who are we to go and appoint a vigilante in a state, as the state governors are the chief security officers of the states, the police and other security operatives are there. We can only assist or offer to assist when our offer is accepted.
“The last time we had a meeting with our members, we agreed to work closely with the government, work with the security and do all they could to try to fish out criminal elements within the fold of the herdsmen because Miyetti Allah is not a criminal organisation; it doesn’t represent any crime or criminal because those criminals are not our members, and we don’t see them to be our members because we don’t condone crime and we condemn crime wherever it takes place, and we sympathise with victims of crimes whether they are Fulani, Igbo, Yoruba, etc. We don’t tolerate criminals in our fold.
“It was a mere suggestion to the governors, if they accept, we work together, but if they don’t, whatever approach they want to adopt, we are always ready to be part of the security initiative in every state to do our best in assisting government, security agencies to fish out criminals because we have had enough, where some few criminals are smearing the name of the entire Fulani people in the country.
“We don’t like it and that is why we offer ourselves to security agencies and to state governments, where they require our assistance, and we have instructed our members whether at local government level to work closely with traditional rulers, vigilante groups and the government in fishing out criminals, and working to ensure security in their community.
“This is all what we meant, but somehow, some people gave it a wrong interpretation. It was a mere suggestion, but with or without it, our doors are open; we are ready to assist security; we are ready to work with government, we are ready to work with community, work with neighbourhood watch or vigilante groups, whatever you have that is taking care of security in those areas. Our members are ready to work with security in fishing out criminals.”