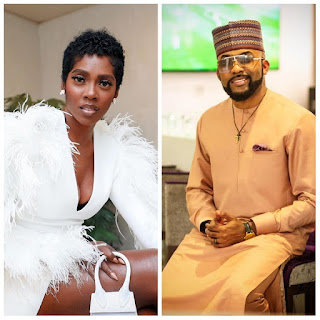 Tiwa Savage in a recent interview with Vanguard has revealed that her most embarrassing moment was when Banky W saw a bit of her flesh.

According to Tiwa Savage, she was set to perform as an upcoming act at 2Baba’s concert some years back; when her attention was drawn to a part of her ‘flesh’ that got exposed.
”My dress for my stage performance at 2face’s album launch arrived very late. Literally, it came in 5 minutes before I was supposed to mount the stage.
“I didn’t have time to try it on before my performance. The MC announced: ‘Next on stage is rising star, Tiwa Savage.’ So I quickly put it on,” she said.
As soon as I was walking up stage, the zip ripped at the back and I didn’t even realise. “Banky W saw it and was like “Oh my God! Your whole back is opened.
She added that it was really embarrassing to her because she felt Banky W saw her naked.