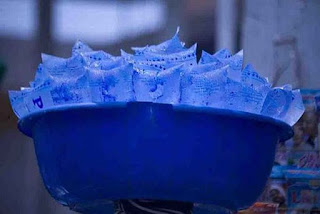 It is no news that Lagos State Government has banned the use of (Marwa) and (Okada) from plowing the state’s highways, bridges and expressways, confining commuters to board buses.

The ban directed by Lagos State Governor Babajide Olusola Sanwo-Olu has heard a lot of backlash from Lagosians, as it has disrupted businesses, daily commuter routes.
PM NEWS correspondent gathered from a 25-year-old student who chose to remain anonymous that Marwa/Okada riders of Agege Local Government area in Lagos pelted passengers of a mini-bus (Korope) with sachet water for boarding bus and not calling the attention of the government to the restriction.
In her words, the student said;

”It happened on Monday morning while heading to pen-cinema, Agege. Getting to my street junction where I board Marwa on a normal day, I met none, even those plying the route were all saying they are not going, then I started walking hoping to find a Marwa going on my way”.
”Fortunately, a korope bus was heading to pen-cinema, and I boarded it. On getting to an X-Junction at Agege Stadium, some Marwa riders parked their Marwa and were asking the korope driver where he was heading, so unknown to him they were only asking to get ready to attack if he was plying where they are meant to pass”.
”I was sitting in d front sit, lost in thought then I heard a loud bang on d bus which brought me from my reverie before I could look out to see what’s happening a sachet of water coming with full force hit me, the attack was from both sides. The other sachet water thrown kept hitting the bus and splashing on the passengers”.
”They laid ambush there and doing the same to every other korope passing. While returning in the afternoon, the korope I boarded had to pass another route avoiding them