www.bimloadeLagos Pon  of  who leads a 7 ma 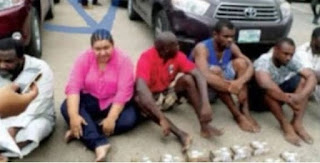 Men of the Nigerian police have arrested an Indian lady named Alisha Noble who leads a 7 man robbery gang to terrorize the state.
According to reports, she was arrested along with her gang during a robbery operation on February 27, 2020 during a robbery operation along Lagos-Apapa expressway.
Confirming her arrest, DSP Bala Elkana, the Lagos PPRO, revealed that she and her gang were arrested after series of gun battle with the police before the Nigerian army came to their rescue.
Confessing to her role, she stated that n amount of bullets shot at her can penetrate her body because she was fortified at India by a great priest who died after fortifying her.

About BIMLOADED 3079 Articles
Anjorin Abimbola Oluwaseun is the CEO of bimloaded.com.ng he is from imota Lagos Nigeria... He is a blogger and also a Dj. His stage name is Dj Bimbus