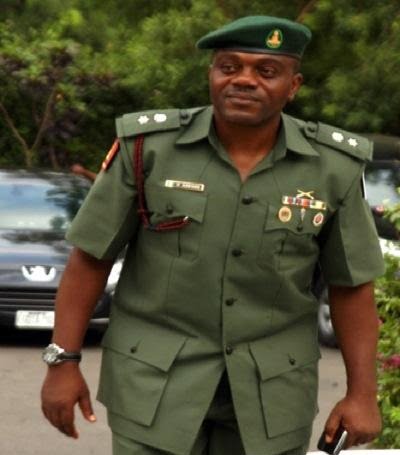 Col. Ojogbane Adegbe, former aide-de-camp to former president Goodluck Jonathan, has warned that another Dasukigate may be imminent if he is forced to reveal what transpired in that administration.
The Economic and Financial Crimes Commission (EFCC) arrested Adegbe on Wednesday in Lagos where he went through rigorous interrogation before he was flown to Abuja yesterday.
It was learnt that interrogation proceedings of the former ADC by the EFCC officials could open up a new can of worms, which “could surpass what is now known as Dasukigate.”
In December 2015, Jonathan’s National Security Adviser, Col.Sambo Dasuki was arrested by the Department of State Security (DSS) and handed over to the EFCC over his role in the $2.1 billion arms purchase scandal.
The money, meant to purchase arms for the military fighting insurgency in the North-East, was said to have been diverted through the office of the NSA and used for 2015 campaign for the Peoples Democratic Party (PDP).
The EFCC is hopeful the former ADC may soon give details of all he knows with regards to financial transactions and the dramatic personae involved in the last administration, an insider told the Sun.
Preliminary findings, including recovered documents, were said to have suggested a large-scale of questionable expenditure with funds sourced from and outside the arms purchase deals.
Another source told the newspaper that, “most of the funds were reportedly diverted soon after the election was postponed from the originally scheduled date of February 14, 2015 to March 28, 2015.”
Among the active participants in the alleged loot, was a top official of an agency set up to discourage militancy in the South-South, who is currently outside the country.
At the centre of the interrogation of the former ADC, who has been moved to Abuja, Daily Sun reported, was the “mind-boggling spending” during the two weeks’ extension of the general election, “which runs into several trillions of naira, when converted from foreign currency.”
Sources disclosed further that many top Nigerians, “including some very close persons” to the former president, may likely be called to explain and defend their roles in the handling of the funds, a chunk of which was sourced from the agency.
The ADC who was arrested in Lagos a few days ago, was alleged to be attending a senior officers course when he was picked up for interrogation.
Before him, many serving and retired military officers had been quized in connection with the arms purchase deal during the Jonathan administration.
Former Chief of Defence Staff, Air Marshal Alex Badeh (retd) and the former Chief of Air Staff, Air Vice Marshal Amosu (retd) and other top politicians have been under EFCC investigation.