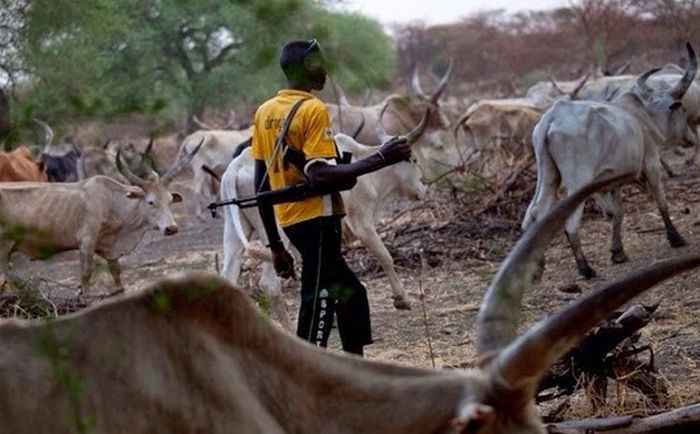 Suspected herdsmen have reportedly shot a hunter to death in Orin Ekiti, sparking protest in the area.
The hunter, Emmanuel Ilori, was said to have been killed at midnight while hunting for animals with some of his colleagues.
This came barely 24hrs after a lady was murdered at Ise Ekiti.
one of the hunters, Mr Adeniyi Ajayi, who was in the bush when the incident occured, explained that they met herdsmen numbering about 30 in the abandoned piggery farm in the town and when they attempted to inquire what they were doing in the farm the herdsmen opened fire on them thus resulting in the death of Ilori.
He claimed that “the herdsmen were kidnappers using the forest as a hideout.

“Subsequently the corpse of the hunter had been taken away by security officers for further investigation.”

During a visit to the scene items such as knife, cutlass, dagger, and slipers were recovered.
People of Orin community have staged a protest over the incident.
They called on government to take pragmatic measures to check the menace of herdsmen.
The protesters, who were sobbing, made burn fire on the streets of the community to show their grievances over the killing.
Addressing newsmen during the protest, High chief Francis Falua and Chairman of Rice Farmers in Ekiti State, Mr Kolawole Rotimi explained that one pregnant woman was also allegedly killed by same herdsmen last year.
They appealed to Governor Kayode Fayemi to wade into the matter before it gets out of hand, adding that the herdsmen have been attacking farmers and feeding their cattles with their farm produce.
The Police Public Relations Officer in Ekiti State, Caleb Ikechukwu confirmed the incident and said a manhunt has been launched to arrest the perpetrators